Anderson Horne has lived many lives before becoming Salida High School’s new social studies teacher. Born and raised in Houston, Texas, he spent his childhood participating in many activities including an array of different sports, singing in the school choir, Boy Scouts, and drama productions. His first job was in the choir of a Catholic Church who couldn’t convince its congregants to stand up and sing. During his summers, he worked on a ranch building fences and wrangling cattle.

In August of 1991, Horne left Texas 3 days after he turned 18 and completed an exchange year in Germany. He spoke German well at this time but soon became fluent.

“Probably the best day during my exchange year was in February when another guy working out in the same gym asked me where in Germany I was from because he couldn’t place my accent,” remembered Horne.

At the time of his exchange, he already graduated high school and was in college. With the Dean’s permission, he traveled extensively through Europe. During his travels, he went skiing in Austria, visited family and attended a celebration for Christopher Columbus in Portugal, and visited friends in Paris.

“In Paris, I met my best friend Bryce. We are still close 30 years later,” he said.

“The biggest lesson I learned was that learning languages immediately connects you with a whole new group of people, and the returns never diminish.  Listening to their stories, reading their literature and poetry and understanding their music gives you more insight than you can get from all the books you can find. In short, regardless of beliefs, origins, politics, or economics, we are all water from the same well,” he continued.

After returning to the US, he attended Southwestern University in Georgetown, Texas where he double majored in International Studies and German. After his sophomore year, he transferred to the University of South Carolina at Columbia, where he double majored in German and Contemporary European Studies. Before graduating, he was awarded a spot at the University of Bonn in Germany to complete his studies and do research for his senior thesis.

Post graduation he moved to Saipan in the Northern Mariana Islands after his father accepted a position where he worked as a ballroom dance instructor and fishing guide. While on Saipan, he took the LSAT and received the highest score for 1500 miles in any direction. Three years later he received his J.D and M.B.A from Texas Tech University.

Speaking of law, he said, “It was absolutely fascinating, the problem solving aspects of the law were exciting and even fun.”

“It was interesting, and I knew I was making a difference in the lives of the people with whom I worked.”

Later on when his wife accepted her residency, he moved to South Carolina and started a job as a county prosecutor. After 4 years he left and joined a law firm working as a trial lawyer, but also exploring other areas of law, such as estate planning, elder law, and small business law. After three years at this law firm, he decided to start his own.

“I take pride in the fact that almost all of my clients came with me, including several longtime clients of the firm who left and decided I could help them better.”

Horne said what a “day in the life” of a lawyer looks like:  “It is hard to describe a ‘day in the life’ for an attorney. Each day brings new challenges. You might be in trial or hearings every day for weeks on end. You could be reading thousands of pages of evidence or depositions. You could be meeting with clients and witnesses until the early hours of the morning. The one thing that stayed consistent was that I always knew I was helping people and was honored to have their trust when confronted with problems they couldn’t solve on their own.”

Horne started teaching back in South Carolina after experiencing a growing frustration with practicing law. He was coaching lacrosse and was teaching continuing education classes through a local technical college. Suddenly, a local high school, which was considered “a law magnet” offered Horne a position as a law teacher. It was at this time that he closed his practice, distributed all of his cases and clients, and even biked a charity bike ride from Greenville, South Carolina to Austin, Texas, all in a span of 3 weeks. 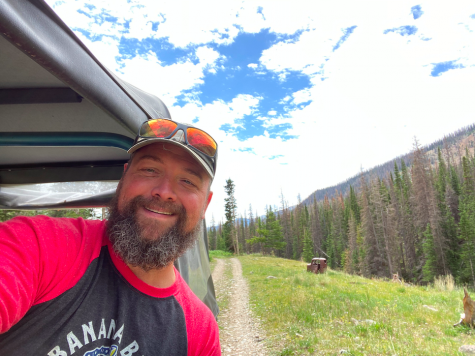 “My favorite part of teaching is connecting with students and seeing the light bulb come on when they grasp a new concept.  I view teaching as being the equivalent to an attorney-client relationship.  The students, not their parents, school administration, or anyone else, are my clients. They are the ones I am working to serve,and they are the ones whose input and cooperation drives the success of the endeavor.”

When it comes to interests and hobbies, Horne loves to raft, ski, sail, and kayak. He also likes to travel, cook, read, and even spearfish. He can pick up accents surprisingly well, does yoga 5 days a week, and is a huge fan of what he calls “productive procrastination”.

“If there is some task I need to complete, like grading exams, for example, I will mow the lawn, organize the garage, clean the kitchen, make a one-of-a-kind meal from all the random stuff in the fridge and freezer that need to be used, wash and fold laundry, and nearly any other chore first, then find myself grading until the wee hours of the morning.  It may not be the best way to do things, but I get so much done.”

Horne moved to Salida in the summer of 2018, as his wife received the opportunity to be a gynecologist here in Salida. He now teaches U.S. History and economics here at Salida High, and is also the adviser of the newly found Law Club.

“My advice for any student is exactly the same as my only two rules for my classes: be prepared. Whatever it is,  apply yourself toward success. Don’t get caught clueless and be respectful (of everyone you encounter… including yourself). Value yourself and your efforts.  It is okay to make fun of yourself, but never beat yourself up or discount your value in this world.  Recognize that everyone is on their own path, including you, and that there will be stumbles.  We all, hopefully, learn from those stumbles. We generally learn very little from winning or success. I suppose that’s why I’ve learned so much over the course of my life.”