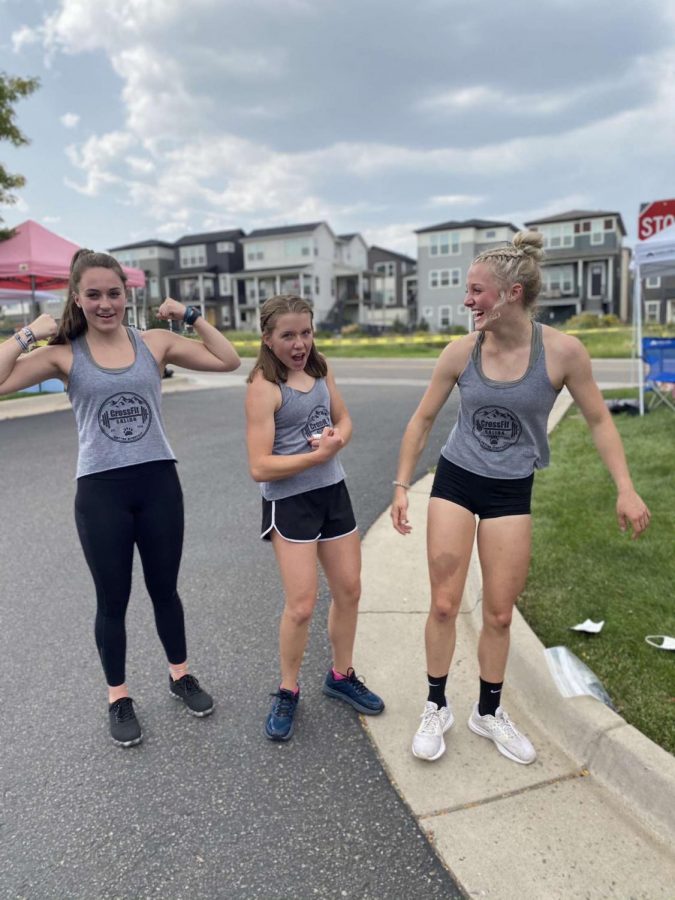 Pictured above Senior Rachel Pelino, 8th grader Cece Lengerich, and Sophomore Ally Post laugh together while posing for a picture. The three girls competed on a team together at the Girls Gone RX CrossFit competition in Denver.

Recently there was a girls’ only Crossfit competition called Girls Gone RX in Denver. Four teams from Salida’s CrossFit gym competed. There were three girls on each team. Teams from all over Colorado came.

Each team competed together for three workouts. Each workout was about 7 to 8 minutes. They got points for their certain times or scores. They did 1 virtual workout before they went because of COVID-19.

The first workout that they did was filmed. The workout was 20 dumbbell box steps-ups, 30 clean and jerks, 40 burpees and 20 dumbbell snatches. How many reps they got done in nine minutes was the score that they got.

Some of the workouts were scored by max calories burned on a rower and a stationary bike for 7 minutes. They did all of these workouts with their teammates. If one person got tired their teammate could help them.

One of the teams from Salida that went consisted of Racheal Pelino, Ally Post and Cece Lengerich.

Senior Racheal Pelino said, “My favorite part about the whole thing was being around our whole group from Salida just cause it was all girls. I really like the environment that our gym has while we’re working out because everyone is so supportive of each other. After our workouts, we would walk out of the gym and have a whole crew from Salida cheering us on and telling us good job. It was really nice. It was a lot of fun to be around everybody all day.” Pelino also said, “It was really cool to see so many people that do CrossFit from all over the state there.”

Sophomore Ally Post who was also on the same team as Pelino said, “It was really fun and everyone was really involved together and supported each other. You went to do your workout and the rest of the time you would hang out in a tent and chill with everybody.”

Although the team had a lot of fun supporting and cheering each other on, the workouts were very challenging. “The workouts were challenging, they really kicked my butt. But since we were on a team at least one person had to be resting while the other people were working. So two people would be working and the other person would be resting,” Post said. “There’s partner deadlifts with about 215Ibs. So you wouldn’t be able to do like 50 sets of those if you didn’t have your partner. With every exercise your partner was there to help you out and that was really nice.”

The XR Girls Gone Crossfit Competition was a fun, new experience for the girls that participated from SHS. The girls would like to participate next year and it is just as great of an experience as it was this year.