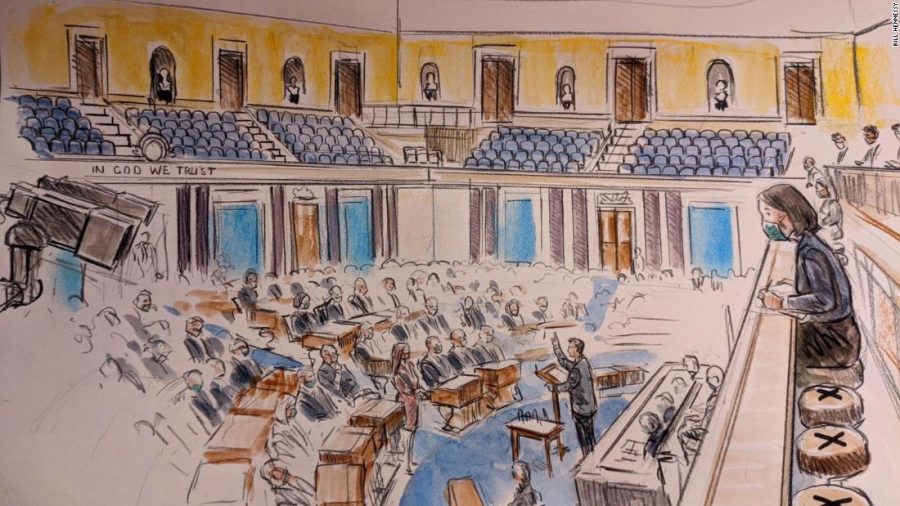 A courtroom sketch of the Senate Chambers during the Trial.

“RESOLUTION; Impeaching Donald John Trump, President of the United States, for high crimes and misdemeanors,” read a bill introduced by Representative David Cicilline (D-RI 1st) on behalf of House Democrats. The bill indicates former President Donald J. Trump on one article of impeachment, Incitement to Insurrection, a response to the storming of the capital on January 6 by supporters of President Trump, which resulted in five deaths, more than 80 arrests, and the discovery of multiple explosive devices. Democrats and Republicans alike have been calling this a riot a terrorist attack, and an attempted insurrection, in part ochristrated by the President in hopes of overturning the victory of President Joe Biden. On January 13, the bill passed, officially impeaching President Trump a second time, a historical first. But on February 13, exactly one month later, the senate voted to acquit President Trump.

The bill outlines the conduct of the President, on and before January 6, in instilling distrust in conservatives. It mentions his January 2 phone call

with Georgia Secretary of State Brad Raffensberger, in which he urged Raffensberger to “find” enough votes to overturn the election, his incendiary D.C. rally, and his failure to respond on January 6.

The bill concludes, “Donald John Trump thus warrants impeachment and trial, removal from office, and disqualification to hold and enjoy any office of honor, trust, or profit under the United States.”

On Tuesday, January 12, the House Judiciary Committee released a report that argued that the President posed an “imminent threat” and that “his continued presence in office is a clear and present danger to the United States.”

On February 9, the Senate Trial began with a vote on the constitutionality of impeaching a former President. The House managers started their presentation with a video compilation of footage of the January 6th insurrection attempt, including footage of a gallow that was erected, the confederate flag, and black clad protestors screaming “Hang Mike Pence”. They also outlined the history of convicting former officials, both in America, like the case of Secretary of War William W. Belknap, and in Great Britain, from whom we got many of our legal traditions. They outlined the legal precedent this would create, one of a January exception, where Presidents could commit any crime they wanted in their last month in office. They said legal scholars, including conservative ones, agreed this was constitutional, and cited our founding fathers, many of whom explicitly expressed their agreement with trying former officials. All in all, they made two big points. The first is that the Senate has, “jurisdiction to try all impeachments,” and that “if that isn’t a high crime, I don’t know what is,” both in the words of Representative Raskin. The council for the former President, consisting of attorneys David Schoen and Bruce Castor, argued instead that impeaching a former president presented a great danger to the role of President, disenfranchised Republican voters, enshrined impeachment as a partisan tactic, and would hurt a nation desperately in need of healing. In the end, all Democrats and both Independents were joined by six Republican Senators, and the Trial proceeded.

The House impeachment managers argued that the former president clearly incited the January 6th insurrection attempt, both through his words in the preceding rally, but also with his rhetoric in the months preceding and his unwillingness to publicly denounce the rioters. Managers brought up tweets and videos released by the former President, explicitly calling out former Vice President Pence, the video in which he told rioters they were “very special,” and videos of his rally beforehand. They showed previously unreleased video showing how close many rioters came to high ranking officials, including former Vice President Mike Pence, Speaker Pelosi, and many others. They used quotes from a heated phone call between former President Trump and House Minority Leader Kevin McCarthy (R-CA 23rd), in which the former president reportedly said, “Well, Kevin, I guess these people are more upset about the election than you are,” to which Leader McCarthy responded, “Who the f*ck do you think you’re talking to?”

The President’s council argued two main points. The first is that the attack was clearly premeditated before the presidents rally by rioters unaffiliated with the former President. The second is that everything the President did was protected by the First Amendment.

After opening statements, Senators were allowed to question both sides. Notably, Majority Leader Chuck Schumer (D-NY) and Senator Diane Fienstein (D-CA) asked whether or not the attack would have happened without the former Presidents actions, Senators Bernie Sanders (I-VT) and Raphael Warnock (D-GA) asked about whether or not both sides believed the results of the 2020 Election, and Senators Ed Markey (D-MA), Tammy Duckworth (D-IL), and Lisa Murkowski (R-AK) asked about what the President did to respond to the rioting after. Republican Senators, including Ted Cruz (R-TX) and Lindsay Graham (R-SC) asked questions pointing at what they see as hypocrisy between Democratic lawmakers, especially Vice President Kamala Harris, who posted bail for Black Lives Matter protestors.

of Louisiana; Susan Collins of Maine; Mitt Romney of Utah; Ben Sasse of Nebraska; and Pat Toomey of Pennsylvania; joined all Democrats and both Independents in voting to convict the former President. This is six more Republicans than those who voted to convict president Trump when he was first impeached (at the time, only Senator Romney voted to convict the President). This fell ten votes short of the sixty-seven needed for conviction.

This also shows a continued devotion from the Republican party to the former president. Ever since his election in 2016, there has been a simmering war in the Republican party over what image the party will perpetuate after he eventually leaves. A war between moderates like former president George Bush, and senators Romney, Tom Cotton and the late John McCain, and the far-right populists like president Trump, Senators Cruz, and Josh Hawley. Minority Leader Mitch McConnell earlier signaled a support for impeachment, which many saw as a sea change for the post-Trump Republican party, perhaps signaling a return to the Neo-conservatism it had represented for the past fifty years. The acquittal of the former president, who remains widely popular among Republican voters, shows a persisting allegiance to the President, and signals that the future of the Republican party is that of extreme right populism.